Making the transition to declared work

Find out more about the several initiatives across the EU to encourage and help workers to choose declared work. 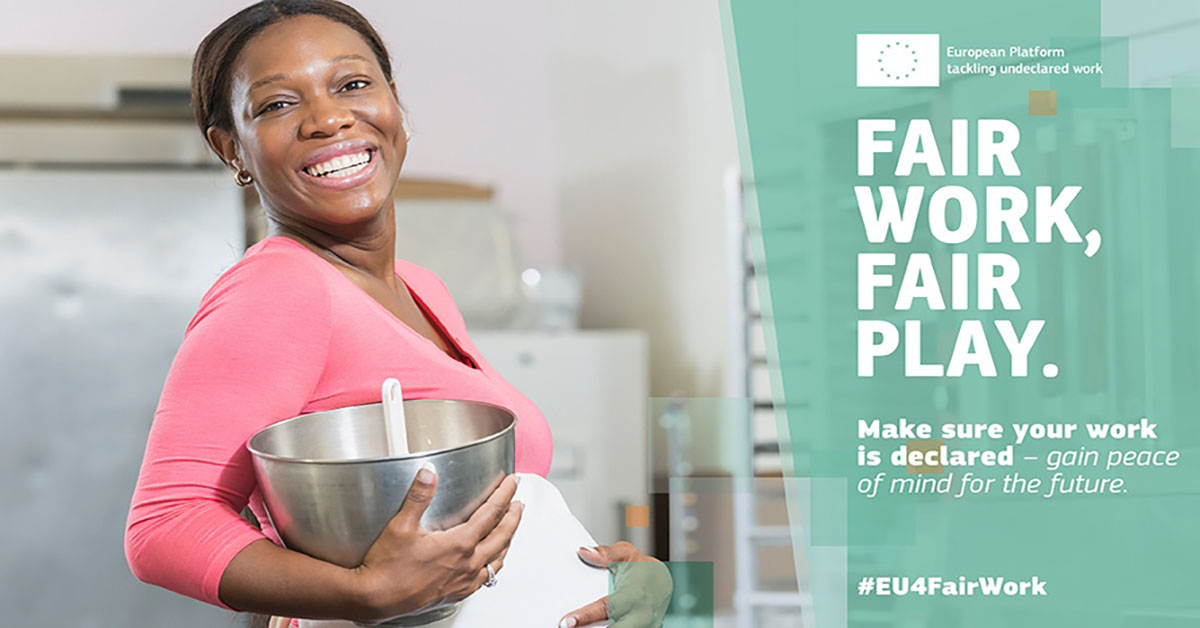 Over the past decades, EU governments have deployed an array of measures to tackle undeclared work. Nevertheless, a large number of businesses and workers across the EU are still operating in the undeclared economy, with workers falling through the social protection safety net and businesses operating on a playing field that is not level. This situation has been exacerbated by the COVID-19 crisis. This article examines what is being done to support the transition to declared work, based in part on the fourth podcast in the #EU4FairWork podcast series, Solutions for moving out of undeclared work.

Undeclared work is strongly related to economic, legal, cultural and social factors. The perception of high taxation and compliance costs can be a strong driver, while conversely, trust in the public sector tends to discourage undeclared work. Undeclared workers are often the most vulnerable in the labour market – young workers, women and migrants – and they may be reluctant to come forward, for fear of jeopardising potential opportunities for future work or of potential threats to their residence status. Cultural acceptance of undeclared work, accompanied by a lack of resources to tackle it and limited confidence in the state and its systems, can also act as a barrier.

Prevention measures also play a key role in encouraging the transition into declared work. One approach is to encourage workers and businesses to engage in legitimate activities by introducing new categories of legitimate work (e.g. short-term seasonal agricultural work in Bulgaria), which should be combined with a strong focus on job quality. Other preventive measures include simplifying compliance procedures, tax and social security incentives and offering support for business start-ups. Nils Trampe, chair of the BusinessEurope Working Group on industrial relations, states that "non-compliant employers can be encouraged by relieving burdens that are both administrative and cost-related. Authorities should help declared employers to decrease their administrative burdens by introducing digital solutions ... Effective control measures and ‘public shaming’ of undeclared companies, and praise of declared companies, can also encourage employers into the declared economy".

Awareness-raising is an important tool in this regard, whereby social partners can help to change attitudes by promoting the benefits of declared work and providing direct support to workers. "Trade unions play a key role in tackling undeclared work, both in terms of outreach to workers, as well as offering safe channels for reporting abuse", notes Isabelle Schömann, a Confederal Secretary at the European Trade Union Confederation (ETUC). "As they may be afraid of losing their jobs, the threshold for undeclared workers to turn for help from trade unions is often lower than for reporting abuses directly to the authorities".

Offering incentives for undeclared workers and businesses to register is also a key policy option. This includes amnesties that allow undeclared activities to gradually move towards legitimisation over a transition period, without involving sanctions.

Initiatives to regularise undeclared work have been introduced in the past in Belgium, Cyprus, France, Italy, Lithuania, and Slovenia. For example, In Italy in 2001, a voluntary disclosure scheme encouraging full or gradual formalisation over a three-year period produced 1,794 declarations from enterprises and 3,854 new declared workers. Further, a 2019 voluntary disclosure initiative in Lithuania offered all businesses and personnel the chance to voluntarily declare income or other taxes without any penalty from 1 January to 30 June 2019, resulting in the collection of an additional EUR 42 million in taxes during this period. Romolo de Camillis, general director for working conditions and industrial relations at the Italian Ministry of Labour and Social Policies, notes that disclosure initiatives can be effective, but that they also need to be offered alongside appropriate support for workers. Further, "[they] have some positive effects, but only in the short term. Therefore, these types of initiatives really need to be supported by … changing attitudes through education and awareness-raising".

During the continuing COVID-19 crisis, the current loss of earning capacity, combined with potential access to temporary financial support being offered to declared workers, is a powerful incentive for undeclared businesses and workers to make use of these types of schemes. In Portugal, a regularisation scheme was introduced granting temporary residency rights to asylum seekers and migrants until 1 July 2020. The Italian government issued a Relaunch Decree to temporarily regularise illegal immigrants working in the agricultural and homecare sectors, providing six-month residence permits, regular employment contracts, healthcare coverage and housing security during the pandemic.

The ETUC has stressed that such regularisation measures would "reduce vulnerability, labour exploitation and the social exclusion of irregular migrant workers, ensuring their full equal treatment, decent working conditions and access to public healthcare".

The European Platform tackling undeclared work is pivotal in enhancing cooperation between EU Member States focused on making the transition to declared work. This transition requires a whole-government approach to address the reasons behind informality to use the full range of available policy measures. Overall, the focus should be as much on preventing non-compliance than on resolving undeclared work after it has taken place.

This article is part of the #EU4FairWork campaign launched by the European Platform tackling undeclared work, together with the European Labour Authority